The eCube server device connects to a host computer via gigabit ethernet. In order to maximize data integrity and connection stability, we highly recommend directly connecting the eCube to a host system via a dedicated network interface, or dedicated internal LAN with 1Gbps (line-rate) forwarding. 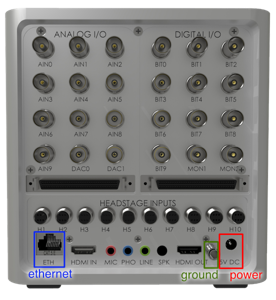 The following steps detail the process of setting up the host computer for direct eCube connection using host DHCP.

If you are using Windows 10, network connection sharing settings may be reset on rebooting of the system, especially for setups involving USB-ethernet devices. As a result, after the above network setup steps are complete, it is often desirable to re-run the fully-automated sections of eCubeNetworkSetup on reboot.

Follow these steps to run eCubeNetworkSetup automatically on reboot without user intervention:

The eCubeNetworkSetup.ps1 script will now be run at system startup for your Windows 10 PC.

These instructions can be used under a Desktop install Ubuntu 18.04 (Bionic) or 20.04 (Focal), which uses network-manager by default to manage the systemd network overlay. Note that "Server" installations of Ubuntu needs to be configured instead through netplan.